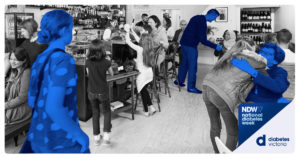 Active Medical Centre in Caroline Springs are joining forces with Diabetes Victoria during this year’s National Diabetes Week (Sunday 9 – Saturday 15 July), calling on all Victorians to learn more about the invisible condition of diabetes, which is a affecting more and more people every day.

“People with diabetes look like everybody else – they come in all shapes, sizes, ages, gender identities and ethnicities. You cannot see if somebody has diabetes, nor can you tell which type of diabetes they have,” said the team of doctors at Active Medical.

Every day, more than 80 people in Victoria develop diabetes and, of those, the majority have
type 2 diabetes – which is linked to lifestyle issues such as a poor diet and a lack of regular exercise. Just as concerning – one in every four Victorians over the age of 25 is directly impacted in some way by this condition; however, they might not be aware of this.

The theme of Diabetes Victoria’s new digital awareness campaign is Invisible Condition, highlighting that diabetes doesn’t discriminate and that it is too important to ignore. A 30-second video visualises the growing number of people affected by this invisible condition – which might fly under the radar of the general public. The campaign also encourages communities to make their mark with their local Member of Parliament by signing an online petition to increase funding for diabetes research.

“With almost 314,000 Victorians living with diabetes and an estimated 125,000 Victorians with undiagnosed diabetes, there is an increasing need to provide expert advice, resources and programs so people affected by diabetes can live well and ensure that the seriousness of diabetes is raised amongst various Members of Parliament at the Victorian Parliamentary Diabetes Support Group meeting later this year,” says Diabetes Victoria CEO Craig Bennett.

“There are three main types of diabetes: type 1, type 2 and gestational diabetes,” says Mr Bennett. “Each type of diabetes has different underlying causes and may be best managed with different strategies. However, once you develop diabetes you will have to manage the condition every day for the rest of your life. There is a great need to raise awareness about this, in particular.”

Visit the website invisiblecondition.org.au to learn more about the campaign and Diabetes Victoria’s programs and services.

We support, empower and campaign for all Victorians affected by diabetes.

If you would like to check if you are at risk of diabetes or for more information on preventing or managing diabetes book an appointment with your doctor at Active Medical. Make an ONLINE BOOKING or phone our friendly team on 9363 0954.